the glossy koa is stunning and even has some kind of 3d effect, apart from two almost invisible drops inside the soundhole the glossy finish is flawless like a mirror. just as you would expect it from kala. the maple accents really fit into the overall looks and don’t add too much bling to the instrument.

due to the maple binding around the fretboard, the neck looks even narrower than it really is (35mm at the nut, 45mm at 12th fret) – nevertheless there’s not much space for 8 strings on the kala standard neck anyway. action is imho comfortably low as you can see on the picture: almost nothing on 1st fret and only 2mm on 12th fret. makes the “hard” aquila strings really easy to handle 😉 even though it is a slightly different story when you have to fret string pairs instead of single strings. i found it particularly challenging on partly barring chords like dm which i play with only two fingers: index on 2nd string, middle finger barring strings 3 and 4. not muting 2nd string with the middle finger is no problem on a 4string but needed some practice on the 8string – maybe i should work some more on my overall fretting precision anyway… 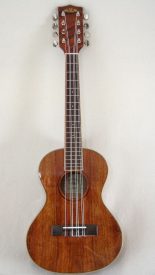 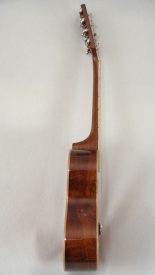 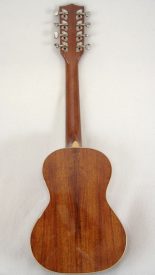 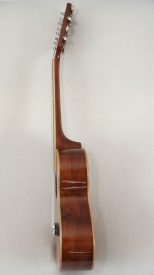 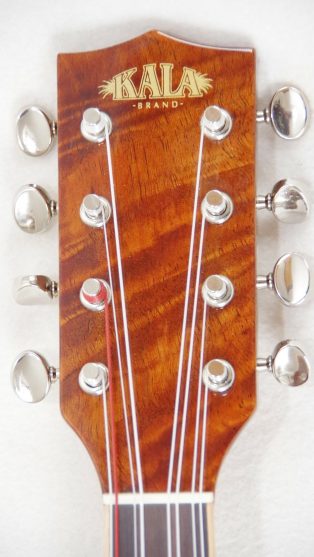 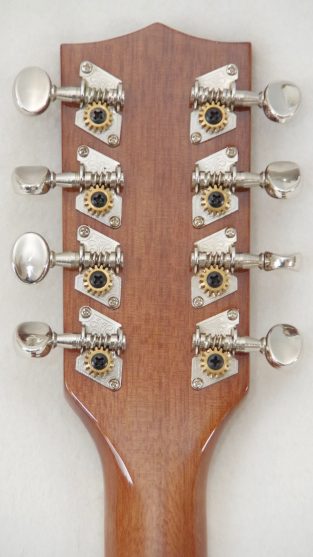 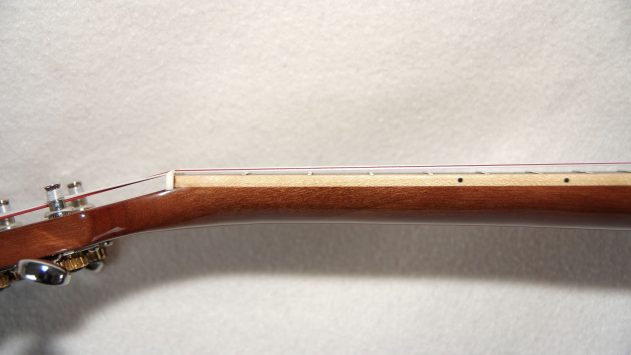 tenors do have a fuller sound than sopranos and concerts, that’s a matter of fact and caused by physics: bigger bodies generally resonate better. one might think that the 8string simply sounds like two tenors played in unison – but that is not completely true. the low g and high c strings add a lot more to the overall sound than i had expected, the 8string sound is way more than just 2x 4strings. it immediately reminded me of a steel string guitar (which is not necessarily a bad thing but still a surprise from nylon strings). would be interesting to hear it with a set of fluorocarbon strings, e.g. living water strings (all unwound, set comes at GBP 15,50 + shipping)…

until i have recorded some sound samples with the kala (which might probably never happen) you can get an impression from the videos below. pls note that aaron of hawaai music supply plays a pono (mt8? available at >400 US$), not the kala (~300 US$).

update: here are some “quick-and-dirty” sound samples with living water strings (Ken Middleton was so kind to individually create the 8 string set). first all strings individually, 2nd some strumming (c, am, f, g7, c, e7, am, dm, g7, c). all recorded on the fly with my smartphone – no fancy tech stuff or filtering