i couldn’t resist when i saw this koki’o transparent plastic soprano – maybe i will found an underwater ukulele group one day ;-). the only non-plastic parts are the tuners, all the rest should be 100% waterproof. apparently plastic ukuleles are on the raise again, targetting the lower end of the price scale whilst promising a steady level of quality. after buying a flea with plastic body and fretboard, this seems the next logical step. sound samples on the web are still rare, but not disappointing (nor discouraging). see the original promo video by rigk sauer of ukulele.de, a sound sample by uku-lele.ru and a quick review (in polish) by przyjazne-ukulele.pl (all on youtube).

the koki’o plastic ukuleles are also available in black, transparent blue, transparent red and “wood” – all are soprano scale. click here to get one directly from ukulele.de.

i love the idea of putting stuff inside like e.g. some led lights or similar – this could become a whole new ukulele experience…. 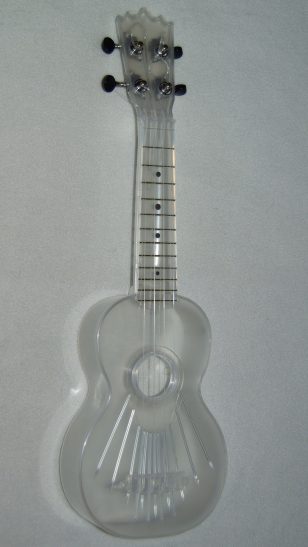 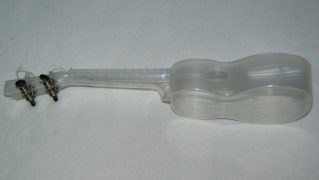 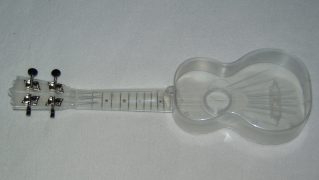 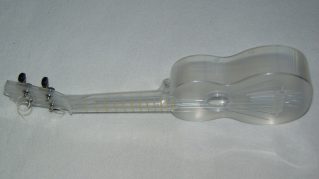 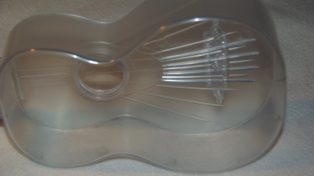 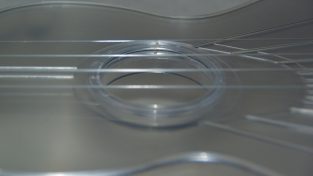 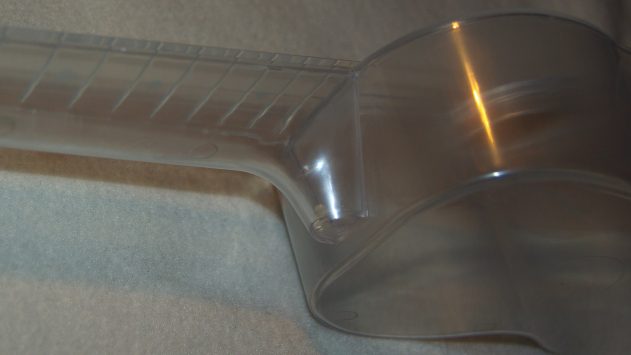 the plastic feels amazingly smooth, even soft. reminds me of a plastic bucket somehow. for some reason i had expected it to feel more rigid, more like polycarbonate. despite the soft feeling the body is rigid, don’t get me wrong – a plastic bucket would never be able to handle the string tension at all. the uke came with the nowadays usual aquila strings, all of which had way too many windings on the tuning pegs – cutting of some string slack before winding would have been a good idea before shipping. anyway, how much setup can you expect for less than 30 euro these days – i know how to fix this myself… the bridge crackled a bit 😮 when i brought the strings to tension. note it did not crack, i just heard the tension kicking in 😉 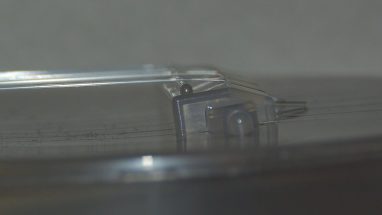 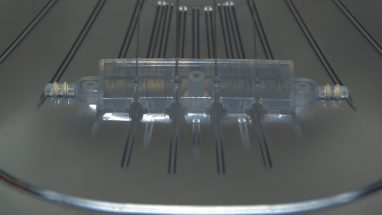 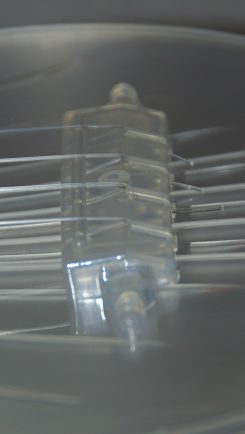 bringing a new set of aquilas up to tune is quite a challenge, they seem to stretch forever and ever. despite that i couldn’t resist plucking and strumming a bit for a first impression. and guess what: i was a bit disappointed by the muffled sound. apparently the plastic body does not resonate like a high end uke would do – and the aquilas seem to play an important role here too. sturdiness in transparent plastic comes at the price of thicker material, and thicker material resonates less (same goes for wood btw). holding the uke as free as possible (i.e. not sqeezing it between belly and forearm but resting it on my lap) sounded immediately better. as a first measure i swapped the aquila strings for a set of martin 600 fluorocarbon; even before being stretched out they sound way better to my ears. and they settle quicker. maybe i will swap them again for a set of low-g fluoros later….

technically the intonation is pretty good with only minor deviations on 12th fret; action is slightly high with 1.5mm at first fret and approx 3mm at 12th fret. might be an option to lower the zero fret a bit to improve intonation. The nut grooves could be a tad deeper as well, right now the strings have two breakpoints: one on the zero fret and one on the nut. looking at the overall sound and price i consider this more a cosmetic issue, effects on overall output will be hardly noticeable.

the molded frets are pretty low profile, you really need to fret a bit further down the neck to avoid muffling the note with your fretting finger. at the same time you should press a bit harder to make sure the string is fretted correctly. 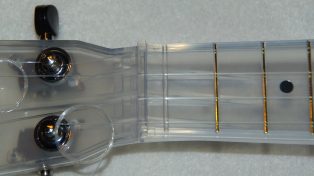 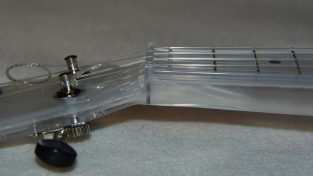 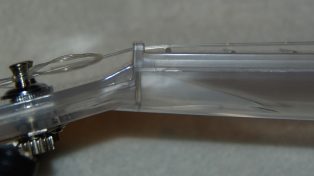 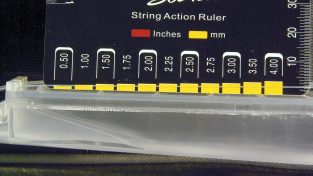 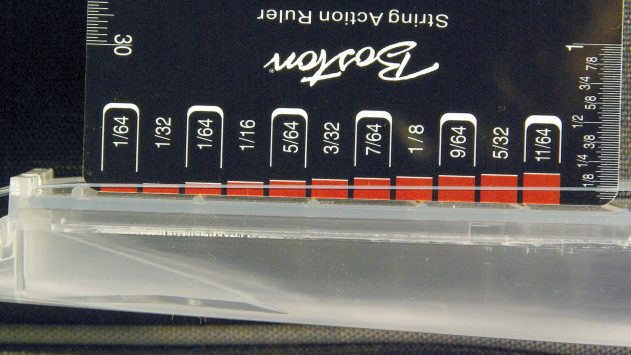 first of all i will get myself a gigbag, i don’t like the idea of stuffing it in my backpack or elswhere without any protection. the plastic seems not too scratch-proof and i don’t want to ruin the transparent looks right away.

soundwise i have to wait until the strings have settled, so far i am only sure this is a uke where aquilas are simply the wrong choice of strings (usually aquilas are at least a less-than-optimal choice, but here they seem just plain wrong to me).

the strings are almost stretched out and confirm the first impression: overall sound is a lot brighter now, more “vivid” – only the c string sounds a bit muffled. reasons? unknown for the time being, i assume it is something in the direction of material not resonating properly on these frequencies in combination with less-than-optimal sound transmission from string to uke body. after all the bridge is only a hollow structure bolted to the soundboard. plucking the open c string makes the whole ukulele vibrate on the other hand…. anyway, i will keep an eye on that.

it seems the plastic top is not really made for string tension, apparently it keeps bending more and more. all over sudden the c string started buzzing at the bridge – it is bent as well and now the c string has no more pressure on the bridge. sliding a small piece of paper between string and bridge was no problem (somewhat proving my point about the bent bridge) and stopped the buzz.

i wonder if a massive bridge or one made of a harder plastic material would have prevented this… and i need to find a more durable solution, maybe glueing the plastic bridge to the plastic top would help. or i simply get in touch with the vendor, maybe he has a better idea already.

and i wonder if the makala waterman (which is also available in transparent “color”) would have the same problems.

One thought on “koki’o soprano plastic”